NGroup’s headquarters is in the light industrial precinct of Dromana, a seaside town on the southern Mornington Peninsula about 80 km southeast of Melbourne.

When company founder and owner Mark Nicholson decided to invest in environmentally sustainable systems in 2009, the first action was installing water tanks. Water conservation was a major public focus after the so-called Millennium Drought of 2001–09 created severe shortages in southeast Australia and wreaked havoc on the natural and human-made environment. Rainwater is collected from the 500-square metre factory roof and stored in two 15,000-litre tanks for use in toilets, bathrooms and the kitchen. An ingenious “first flush” system diverts the initial dirty runoff into the stormwater system. The cleaner rainwater is triple filtered and is suitable for drinking.

After being “off the water grid” for several months, the water retailer assumed the meter was faulty and sent a worker to install a new one. As he walked up to the building, he said to Mark, “Oh, you’ve got tanks, haven’t you?” Yes was the reply. “Oh well, I’m here to replace the water meter anyway.”

Mark has been testing the efficiency of the 3 types of solar panels over two and a half years. They perform similarly with the difference being less than 1%.

Also installed were Thermann evacuated tubes, which produce hot water for hydronic heating in the offices.

The efficiency of panels connected to a string inverter is reduced if just one of the panels is even partly covered by shade or dirt (including bird droppings) or has abnormally high resistance due to a manufacturing defect.

Panels with micro-inverters operate independently so every panel performs at its maximum potential.

Mark is evaluating the performance of the 5 kW string inverter array versus the 5 kW micro-inverter array, with the latter well in the lead at present.

Six solar panels have been installed above the large factory roller door and the north-facing windows of the office.

The provide shade, reducing heat in the office and therefore air-conditioning requirements. When in full sun, the panels provide enough electricity to drive the main office air-conditioning system. They generate 1.5 kW and are connected to a string inverter. 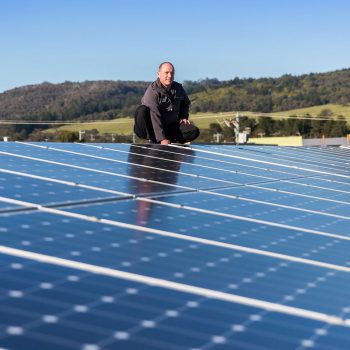 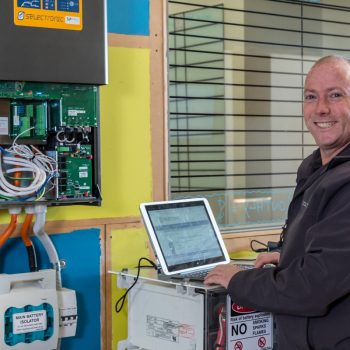 View some of our projects